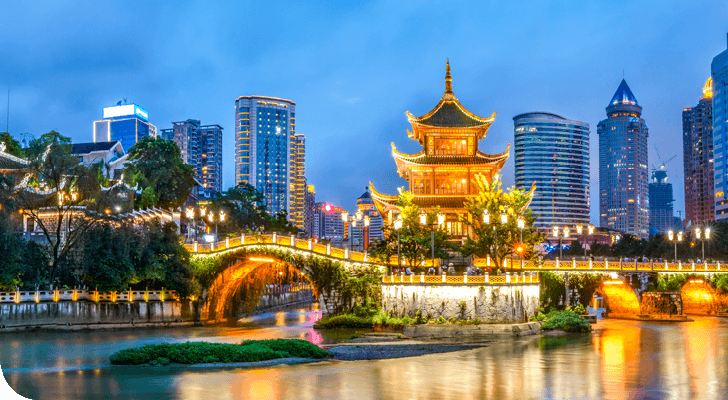 The Dragon Rises: Welcome to China

In a world where we celebrate Family Day, Valentine’s Day, and lots of other similarly dedicated days, students at Nanjing University in China decided in 1993 that singles also deserved a day of their own. They chose the obvious date – 11/11, entirely made up of the numeral 1 – to mark the occasion.
Thanks to brilliant marketing, Singles’ Day eventually became a crazy day of offline and online shopping, consistently breaking all previous sales records every year. Likewise, it seems that our Nation of the Month – China – also sets yearly records. The country combines spirituality, heavenly philosophies, and ancient mind-body doctrines with economic might, firmness, and guarded screening of Western values.
Let’s get a little taste of this unusual place.

What you should know about China
Sometimes, the Party Never Ends
Unlike other nations around the world, the Chinese New Year has no set date, because the Chinese follow a lunar calendar. Therefore, the holiday can fall anywhere between January 21 and February 21, and it is celebrated throughout the country for 15 straight days! In China, the new year is also considered to be everyone’s birthday as the Chinese believe that everybody turns one year older on New Year’s Day.

It’s Only a Game
Among all the imaginable popular sports, China’s national sport is table tennis, which is rather surprising as the Chinese invented soccer 2,200 years ago. The first soccer balls were made of leather and were filled with feathers and hair. As for table tennis, although it was invented in England, China dominates the sport, having won 116 of the 138 World Championship titles since 1981.
A Short History of Inventions
We know that the Chinese have given us some of the greatest inventions of all time. This short list demonstrates just how impressive China’s inventiveness is: paper, the water wheel, the iron plow, stirrups, the compass, the printing press, suspension bridges, mechanical clocks, cotton cloth, silk, gunpowder, and ice cream – including green bean flavored ice pops. China even has a law that makes it mandatory for children to visit their elderly parents. Sounds nice, right? The law, not the ice cream.

An Idea of Scale
China is by far the most populous nation on earth, with about 1.4 billion inhabitants, and is the third largest country in terms of geographical area. In some regions, the temperature reaches both hot and cold extremes: 49°C in the summer and -29°C in the winter.
Half of the world’s pig population lives in China. And if we put all of China’s railroad tracks end-to-end, we’d be able to circumnavigate planet Earth not once but twice! Despite its enormous size, all of China is within a single time zone. This means that, in some locations, the sun doesn’t rise until 10 AM.

A Parallel Universe
In China, Facebook was outlawed in 2009. WeChat is China’s social medium and chat platform, with more than 1 billion active users. YouTube also has a Chinese look-alike called Youku Tudo.
Chinese entrepreneurship is highly regarded in the world of apps. Some of them are burning up the internet, such as the trendy TikTok, which allows users to make and share videos up to 1 minute in length.
Chopsticks
The chopsticks we know from Chinese restaurants are also a Chinese invention. This one goes back 5,000 years, when chopsticks were first used for stirring pots, not for eating. Today, the Chinese use close to 45 billion chopsticks a year. On the other hand, fortune cookies are not actually a Chinese tradition and were in fact invented by a restaurant employee in San Francisco.
The Chinese Language
Mandarin, one of China’s several dialects, is the most spoken language in the world, even though one-third of the country’s population doesn’t speak it. What we call Mandarin is actually called Guānhuà, which means “the officials’ language.”

Chinese in Real Time
It is not realistic to hope to master the Chinese language, but it does serve as a serious impetus to assimilate. It is therefore worthwhile getting to know our simultaneous interpretation services. Simultaneous interpretation is done in real time, allowing you to understand and participate in conferences, ceremonies, court proceedings, business meetings, diplomatic talks, and video calls.
If required, our services can also include transcription. This is a very useful option if there is no time to transcribe the content later on, especially with regard to conferences and events with guests from abroad, including China.
Hever’s carefully selected simultaneous interpreters have extensive experience in their profession. We also provide all the necessary technical equipment – acoustic booths, state-of-the-art insulated earphones, a broadcasting system – and experienced technicians.There are clear codes for doing business in China:

• Leave your full range of emotions outside the meeting room and make sure to project restraint and composure throughout your business meetings. The Chinese study your facial expressions to figure out who you are. Cynicism and easy smiles are seen as disrespectful.
• Handshakes in China are much weaker and shorter than in the West. Eye contact must be brief, as a prolonged stare is understood as a challenge.
• The Chinese enter a meeting room in hierarchical order. Therefore, make sure that the head of the delegation or chief decision maker enters the room first so as not to mislead your counterparts. This person must also introduce the other delegation members.
• Personal acquaintance with the other side is very important to the Chinese, so prepare for a lot of small talk. Interpersonal relationships are highly valued to build a foundation of trust. Preferred topics for discussion will relate to China: its art, the sights, and the positive experiences of your stay there.
• Finally, take into account the fact that negotiations will run over the official schedule. This is the Chinese way of gaining a business advantage. Therefore, make it a point to take your own time too.

Talk to us – in any language.
Ideas, suggestions, requests? Want us to report on a nation, language, or idiom? We’re here to do just that, and more.
Feel free to contact us.